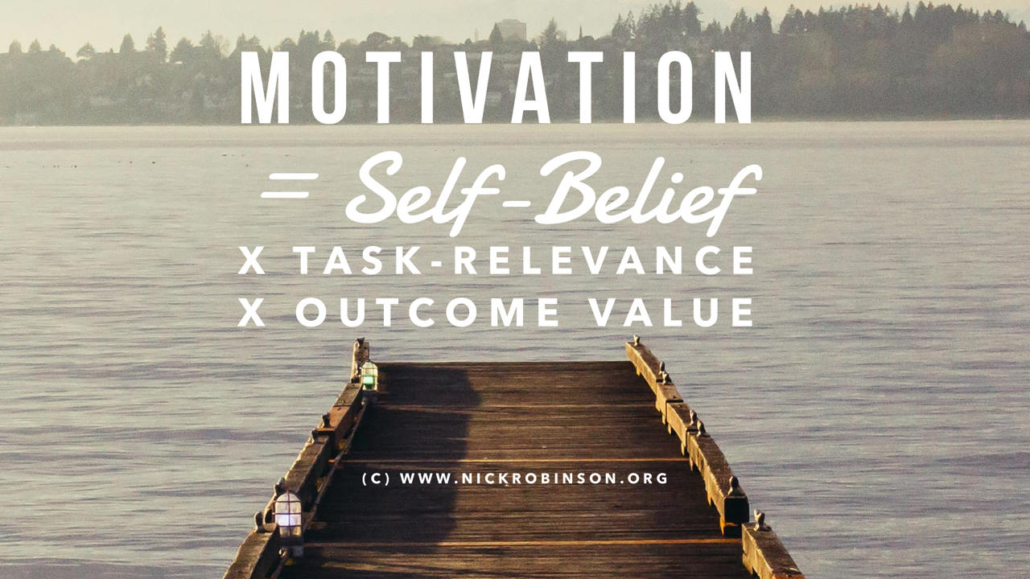 I’ve written before about The Motivation Equation and how leaders can use it to motivate themselves and others to get great results and feel good about their work.

In that original article, I said that motivation is like a chain. Our overall willingness to get stuff done and our overall feelings about our ability to achieve things are only as strong as the weakest link in that chain. In other words, in order to spur ourselves and others into action and to feel good about the ambition behind it, we first need to make sure that each of the components of the Motivation Equation as strong as possible.

We can think of each of the links as a kind of question or judgement that people make about themselves and their situation. For example, in the Task-Relevance link, people might ask themselves: “If I do this task well, will it lead to the outcome that’s required?“

This series of articles will take that much further and deeper, in a bite-size way, by looking at each of the links in turn, starting with Self-Belief.

If you want to motivate yourself or someone else to have more self-belief – either as a way to increase motivation, or just because the right amount of self-belief is usually a good thing – you’ll find the first of my seven essential steps to healthy self-belief set out below.

In terms of our overall Motivation Equation, the question that people ask themselves or the judgement that they’ll be making about themselves or their situation for the Self-Belief link in the chain, is this:

One thing that’s really worth emphasising at the outset is that self-belief is highly-contextual. That is, it depends on what we’re doing, where we’re trying to do it and what our situation is at the time. This is one of the reasons why self-belief can vary so much over time. It’s also why my first essential step is about getting really clear about that context:

What exactly is it that you’re trying to do?

You might be surprised at the number of people I coach who’re not feeling good about their self-belief precisely because they haven’t been clear enough about what, specifically, it is that they’re trying to achieve.

I think that this is partly a kind of defence mechanism – if we’ve been vague about what we’re trying to get done, then we can be similarly vague about whether or not we actually succeed. But that kind of hedging your bets, not being clear about the outcome you want, or avoiding getting too specific makes it much more likely that your motivation will be similarly ill-defined.

So don’t be vague, get clear about the outcome you want to achieve. What exactly is it that you’re trying to do?

For most people, it can also really help to then consider step 2:

How will you know when you’ve done it well?

Again, this is such a simple step, but one that can often get overlooked. It’s also one of the reasons why I encourage people to celebrate and mark the occasion when they’ve achieved something significant. By looking back at it in this way, people get used to evaluating things in a much more rounded way, including the emotions involved in that accomplishment as well as the hard data.

I think also, that one of the reasons why we might avoid doing that kind of post-achievement reflection is because things rarely go as well as our secret desires had hoped for. There’s usually some wrinkle, or some aspect that wasn’t as perfect as we might have hoped.

So don’t wait until afterwards to set-up those measures. Have them be transparent right from the outset. Ask yourself these questions:

And remember to reflect on and celebrate those things afterwards too!

The first two steps towards healthy self-belief are: 1. Define the Outcome and 2. Establish your Evidence. Click To Tweet

In the next article, I’ll continue with the Self-Belief link in the motivational chain and will look at:

I hope that’s been helpful in some way and that this bite-size approach works for you. Please look out for the forthcoming articles in this series. As they’re published, I’ll hyperlink them here.

As usual, please leave me a comment if they’re still open below, or tweet me @NickRobCoach. Tell me about your own experience of motivation and self-belief, either as a leader working with other people, or for you personally?

Is conflict at work happening because people are overwhelmed by all the relationships they need to manage?

Talking with a client recently about the number of connections with customers and team members that he was dealing with gave me an insight into a problem I’ve been seeing more of just recently. The problem is this:

Sometimes, people who are great leaders, who are brilliant at their job and whose teams are delivering great results, can simultaneously have really poor relationships with their peer group of other leaders.

It seems weird to me that people with the interpersonal abilities to lead and manage so successfully aren’t also able to get on well with their colleagues. Somebody with those skills would be capable of great influencing, of good listening, of super coaching. So why weren’t they always being welcomed around the boardroom table as well?

Thinking about what my client had been saying, and about the sheer volume of connections he mentioned, made me wonder about this question:

Can people be overloaded by the amount of interpersonal connections they need to manage, so that their ability to have successful relationships in all areas is impaired?

In trying to answer that question, I remembered some research I’d seen around Dunbar’s Number and Compassion Fatigue…

The limit is thought to be around 150 people – for relationships in which an individual knows who each person is and how each person relates to every other person. (For those people we don’t have a ‘persistent’ relationship with – don’t interact with them that often –  the number could be higher.) I wonder how close some of us get to the limits of Dunbar’s Number, when we consider all of the client, supplier, colleague and team-member relationships we need to focus on? 150 isn’t a huge number. If you added up all the people you need to regularly connect well with, what does it come to?

Research also shows that there are limits to Empathy too.

Empathy: the ability to understand and share the feeling of others.

Empathy is limited in a number of ways, two of which are significant here:

Putting together the Dunbar’s number data and this sense of empathy as a limited resource, made at least part of this issue clearer for me. This is why some clients – often those who are otherwise great leaders – might sometimes struggle to be effective in relating to their wider peer-group. It’s quite possible that they are overwhelmed by the volume and range of relationships they need to manage.

If you’re at the head of an organisation, and you notice that some of your team leaders don’t seem to be getting on with each other, this idea of connection-overload might be one place to look.

As usual, please leave me a comment if they’re still open below, or tweet me @NickRobCoach. Tell me about connection-overload in your organisation or for you personally. Where are the limits of your empathy? What’s your own Dunbar’s Number?