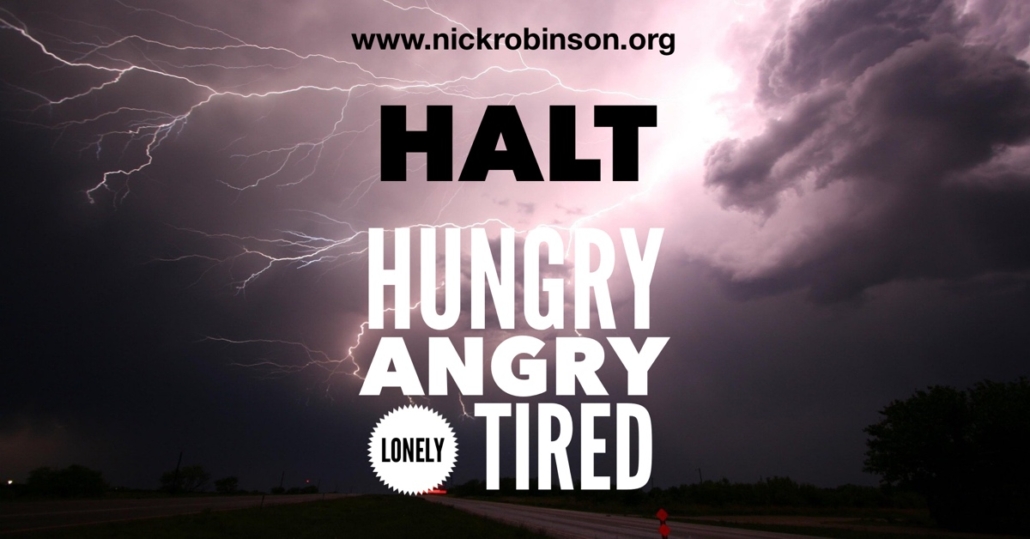 I’ve noticed there’s a lot more snippiness at work at the moment than is good. People losing their temper and sounding-off; others fault-finding and blaming when there really isn’t any need. I’ve seen it in a couple of board-meetings and in some team-working just over the last few weeks.

Given the circumstances right now, it’s understandable that people might be more stressed than usual and end-up taking it out on others. The answer is to take better care of ourselves first.

Fortunately, I’ve also noticed that there’s much more awareness of how this kind of behaviour in a group or team setting is ‘sub-optimal’ than there was, say ten years ago.

Lots of really useful concepts have made their way into our everyday language:

Things like “Hangry” – a portmanteau of hungry and angry, where someone’s hunger is making them increasingly upset, irritable or even angry.

I’ve even heard people use the HALT acronym – derived from addiction recovery, it reminds people to take a moment (HALT) and ask if they are feeling Hungry, Angry, Lonely, or Tired. It seems simple enough, but when those basic needs are not met, people can be susceptible to destructive behaviours.

The importance of this kind of stuff, in terms of doing well at work, can’t be overstated. Years of co-operation can be written-off with a badly-timed and unfair outburst. Credibility as a competent manager can be lost by a poorly-judged public criticism. Trying to get stuff done when you don’t have a good relationship with the people you depend on is non-starter.

I use my own modified (and backwards) version of the Emotional Intelligence model to help unpick and re-wire how we behave at work. In simple terms, it looks like this:

If you want to lead well (which is basically, getting stuff done with the co-operation of others), then you need to be aware of how other people are feeling and doing, and manage your relationship with them. And you can’t do that without being aware of how you yourself are doing and then effectively managing your own behaviours.

Start with that Self-Awareness step:

Let me know what you’re noticing about our self-management these days please?

Either leave a comment below if they’re still open at the time of reading, or tweet me @nickrobcoach.

Coaching for Demanding Situations at Work

Coaching for Difficult People at Work

Don’t talk about Doom and Gloom – Act!
Scroll to top