I’m occasionally asked to help when a man in a senior leadership position is seen as being particularly challenging or negative in his relationships. Or similarly, when his interpersonal behaviour is having a damaging effect on other people or is just not getting the results that the business needs.

My experience has been that it’s almost impossible to help this man change his behaviour by starting out being critical of him. By the time things have got to the point where the business seeks my help, plenty of other people (and, sometimes, even the man himself) will already have been highly critical of him. Even if my being critical would have worked as a behavioural change catalyst (and sometimes it can), that option is often no longer available to me.

Instead, I often apply a change strategy based on two key aspects:

Positive Intention works by seeking to understand, from the other person’s perspective, what was the ‘good’ outcome they were hoping to achieve by applying the behaviour that they used. Even if the actual outcome they got was highly negative, there will be something from their point of view that they were trying to achieve that, to them, would have been a positive outcome.

If I can understand what their Positive Intention is, as they see it, that’s halfway to creating the rapport and partnership we need for me to help them explore other behavioural strategies.

I’ve listed some of the examples I’ve come across of Positive Intention in the table below.

I’ve noticed that there’s something about metaphors in a coaching context that lets them fly right under a client’s radar, bypassing any resistance to change.

When we’ve found a metaphor that works well to either describe what the client’s positive intention was, or to picture how a ‘good’ interpersonal relationship might work, I can often see that it’s like weight has been lifted from their shoulders. See the table below for some examples. 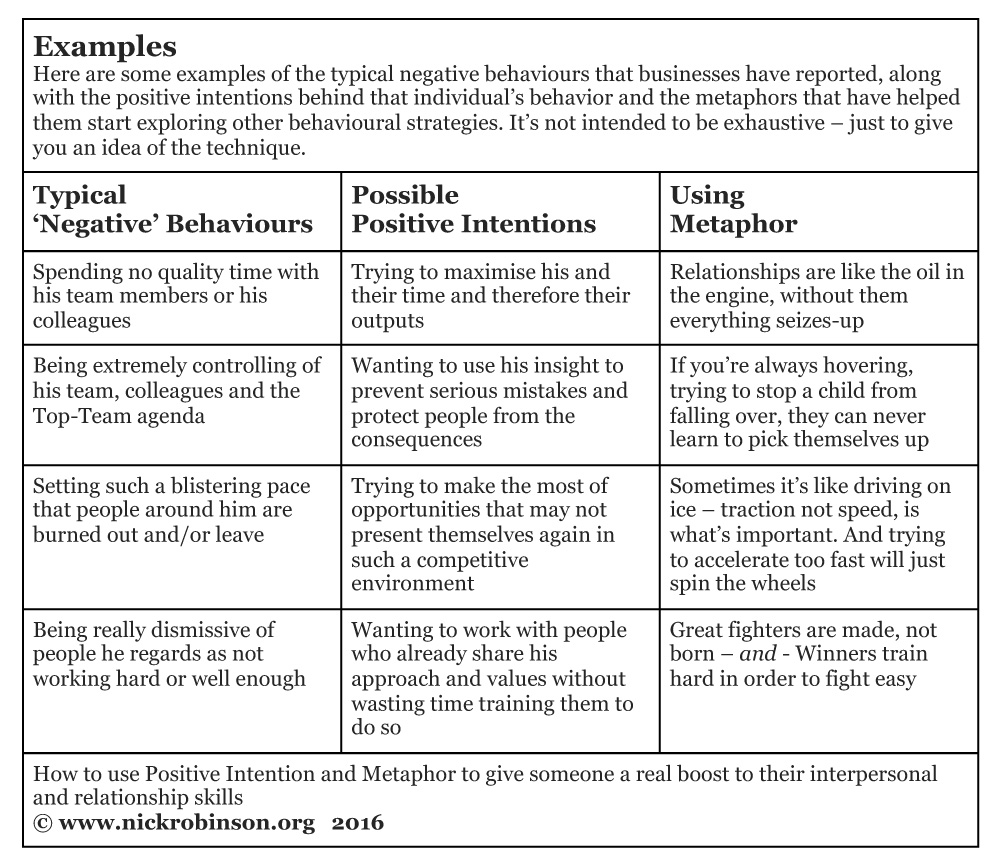