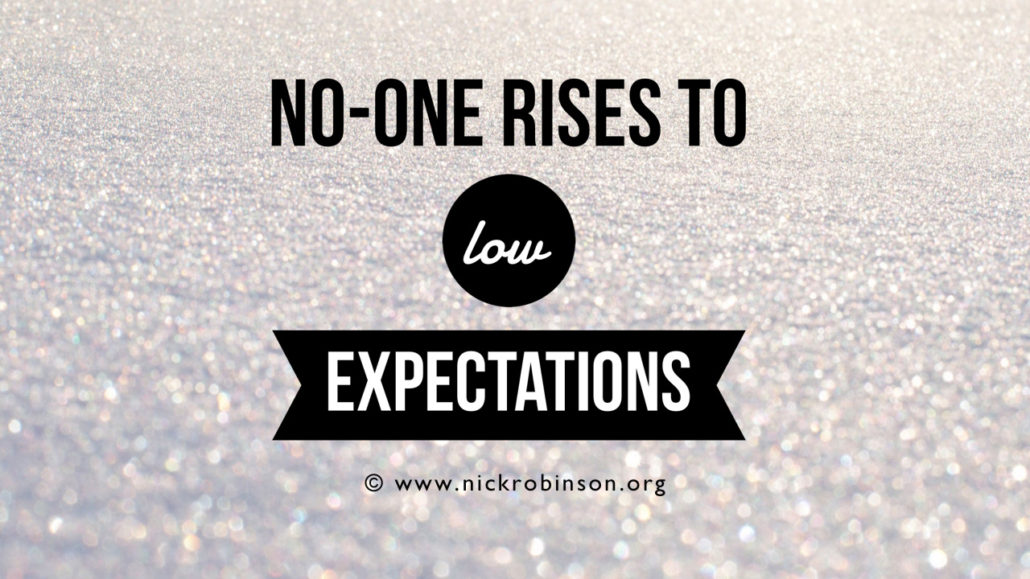 I love this saying, because it’s so true. “No-one rises to low expectations.”
The standard you set becomes the standard you can expect. Whatever you regard as normal around here becomes the ‘norm’ – the benchmark for people’s behaviours and the outcomes they strive to achieve.

In my experience, people want their leaders to ask for more than this. Otherwise, what’s the point in having a leader at all!

Don’t you feel like this too? Like you want your leaders to see the best in you, even when you yourself don’t? That you want them to inspire you to go beyond the point you’ve always settled for previously, and help you to find out what you’re really capable of?

But some of the best leaders I know can come unstuck when it comes to asking people to rise and be better. Two of the biggest problems I see again and again are these:

Here’s my top tips for setting high expectations in a really effective way:

1. Be exemplary yourself
Not just in the outputs you achieve, or the pace of your work, but in your leadership style, your emotional intelligence and your own behaviours too.

2. Build your understanding of others
Different folks need different strokes.
Learn what makes the individuals in your care tick. Learn their fears, learn their ambitions. Modify your approach to suit their needs.

4. Show people it’s OK to fail
So long as you manage the risks and learn from the outcomes.
I often quote Batman to leaders who are worried about people failing. Of falling down and hurting themselves.

“Why do we fall down Bruce?
So we can learn to get up.”
Thomas Wayne, Batman’s father

If you never ask someone to risk falling, they’ll never learn to rise up.

5. Ask for what you need
Sometimes we forget the simple stage of asking. And then we get annoyed that people can’t mind-read. Ask people to raise their game. Tell them what you need from them.

6. Coach the Learning
I don’t know about you, but I’m not a big fan of ‘feedback’. “Oh, I’ve got some feedback for you.” Go away, I know what went wrong. What I need, is someone who cares enough to coach the learning out of me. “What did you notice while that was happening?” “What else did you need?” “What would you do differently next time?”

How far can you ask people to go?
Scroll to top