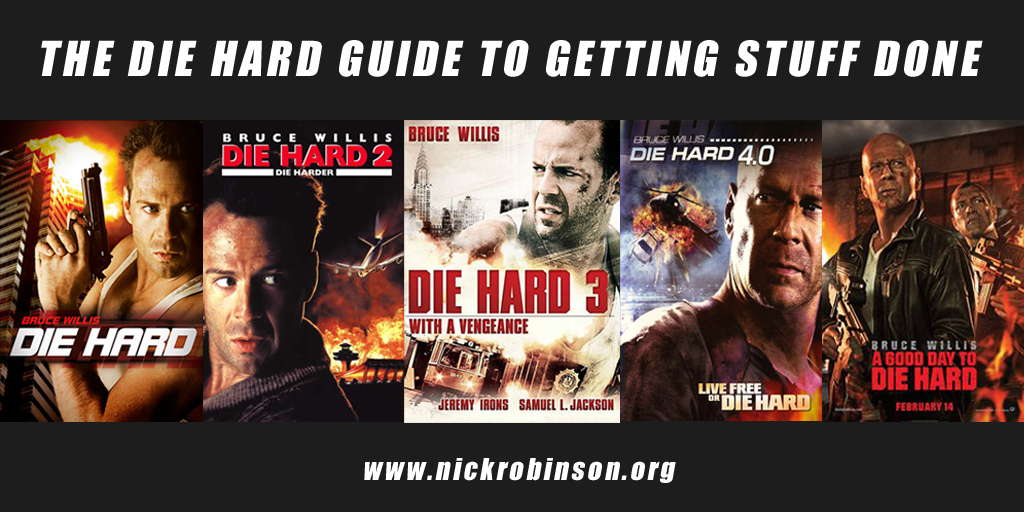 This last couple of years I’ve been getting more and more obsessed with being productive. I expect this is happening because I’m both (a) Lazy and (b) Ambitious. I just don’t see any way of combining those two (without it all ending in tears) unless I’m getting as much done with as little effort as possible.

Combine my recent productivity obsession with news that one of my favourite movie franchises, the Die Hard series, is planning a prequel-come-origin story, and there’s only one thing to do…

Buckle-up, put on your best white vest and be ready to yell “Yippee ki-yay” as we laconically dive into The Die Hard Guide to Getting Stuff Done

One slight warning, the following is absolutely full of spoilers. I can’t imagine anybody hasn’t seen these iconic movies yet, but if you haven’t, maybe rent them first. In sequence, obvs.

Bad guy Hans Gruber and his psychotic side-kicks have taken over the Nakatomi tower on Christmas Eve. Intent on stealing the company’s millions of untraceable bearer-bonds, the only thing that stands between Hans Gruber and the certain death of the Nakatomi hostages is world-weary cop, John McClane.

Barefoot McClane gets shot-at, beaten-up, rejected by the authorities and has to sprint through broken glass.  His plans fail, his ammo runs out, he’s bloody, bruised and bandaged – and his white vest turns steadily dirtier and blacker. But he never, ever quits.

If there’s one productivity lesson (and one thing about John McClane) that we should learn from the original Die Hard, it’s this:

Once again, we find ourselves at Christmas Eve, now at Washington Dulles Airport. This time we’re in a plot involving special forces solders trying to rescue General Ramon Esperanza, a drug lord and dictator of Val Verde, who is being extradited to the United States to stand trial on drug trafficking charges. I forget why they’re doing this; it doesn’t really matter. They’re the bad guys and John McClane is the goodie who must save estranged wife Holly and other airplane passengers from a deadly crash into the snowbound runway.

Nobody can navigate their way around the byzantine layout of the airport (or the plot…), apart from our Yippee ki-yaying hero John, who has one secret weapon on his side that is a great productivity lesson for when you’re lost and can’t see your way forward.

John takes the time to listen to and connect with janitor Marvin, who is hidden away in the bowels of the airport. Marvin’s inside knowledge helps McClane navigate his way around the airport, unseen by the bad guys. The lesson John teaches us in Die Hard 2: Die Harder, is this:

No matter how busy you are, be humble enough to take time to connect with the unseen people working away in the depths of the engine room – they know stuff that will help.

3. Die Hard with a Vengeance

This time we’re not at Christmas Eve. Never mind. A crazy bomber is threatening the city schools and John McClane must team up with shop owner Zeus Carver. The bombs are of course just a distraction, because now it’s gold that the bad guys are after. There are trucks, underground tunnels which flood, a ship, loads of explosions, and plenty of painful injuries. Thanks to the efforts of our heroes the school kids are rescued. But somehow the gold still goes missing.

It looks like the bad guys have gotten away with it. But hold on! What’s that written on the label of this bottle of aspirin that head bad guy Peter Krieg had ironically thrown to McClane? It seems that the aspirin came from a hotel just across the border in Quebec – EXACTLY WHERE THE TRUCKS LOADED WITH GOLD WERE LAST SEEN HEADING…

This small and seemingly insignificant piece of information is the vital clue to the whole puzzle and it inevitably leads to the bad guys getting their just deserts. And that’s the productivity lesson that John McClane has for us here:

Most of the time, the key to being productive is about the big picture, about knowing where you’re going and focussing on that. But just sometimes, the real clues about how to reach your goals are in the tiny, easily-overlooked details. Know when to switch your focus from big-picture to detail.

Now it’s cyber terrorists, because the internet has happened and national infrastructure like electricity, gas and financial stuff is all vulnerable to hacking.

Hard-drinking, hard-to-get-along-with cop, John McClane, is reduced to baby-sitting assignments and has to transport a hacker who is facing criminal charges. Meanwhile, the bad guys start blowing things up and taking out anybody who can identify them.

John launches a car at a helicopter, which explodes. There’s a thing called a firesale, which is about crippling the infrastructure so much that the economy collapses; John’s daughter is in peril; the bad guy turns out to be a spurned cyber-security expert who didn’t get the credit for his government work. John has to team up with the young hacker guy, because he can do that hacker-typing stuff. Oh, and there’s a VTOL jet plane (an F-35B Lightning II), which John also takes out.

There are so many lessons about how to get stuff done in Live Free or Die Hard, that it’s tough to know where to start.

You could look at how John McClane learns to trust and rely on the cyber-expertise of young hackers Matt and ‘Warlock’. McClane might not know cyber-stuff, but he knows people and he knows when to depend on them.

Or you could look at how in the final scenes McClane shoots himself THROUGH HIS OWN SHOULDER to kill the bad guy behind him. That’s getting stuff done right? No pain, no gain!

But for me, the most important lesson from Die Hard 4.0 about getting stuff done is this:

Sometimes, in order to get stuff done, you’ve got to totally disrupt what’s currently happening. It’s not enough to just do things right, you’ve got to be doing the right things. Nothing changes the game like launching a car at a helicopter. They didn’t see that one coming and it certainly cleared the way for the priorities that John really had to be getting on with.

It turns out that John McClane’s estranged son Jack is an undercover CIA agent. Jack is facing trumped-up charges for assassination in Russia and so John travels to Moscow to help him out.

There are also red-herrings all over the place, as the file turns out to be non-existent and is actually a clue to a secret entrance to a Chernobyl vault containing €1bn worth of weapons-grade uranium. It’s this uranium that everyone (not just the bad guys) has been betraying each other in order to reach first.

A Good Day to Die Hard is a lot like trying to get stuff done in real life. You can never really be sure what’s going on. Somebody tells you that the secret file is the key, but do they really know what they’re talking about? What if they have an agenda of their own?

A pivotal point in the plot is when John and Jack meet up with Komarov’s daughter, Irina. They’re in a grand hotel in the city. Irina will provide them with a key to the vault which contains the (non-existent) file. The file will exonerate both Jack and Irina’s father Komarov, as well as incriminating Chagarin. So why is Irina acting so shifty…? John McClane trusts his instincts and just knows that Irina’s shifty behaviour is not right. That her motives must somehow be off. This gives them vital seconds to escape the devastating gunfire that rips through the hotel ballroom’s windows.

It’s this point which for me is the big lesson in getting stuff done from Die Hard 5:

When you’re trying to get stuff done, people around you will promise one thing and do another. Their motives will be different from yours. Most of the time, they’re not acting against you (unless you’re John McClane), it’s just that they’ve also got an agenda, stuff that they need to get done too. Trust your instincts to know when this is happening and deal with it in as straight-forward a way as possible.

Don’t let your Outer Critic get out of Control